Ceiling Fans: What You Should Know 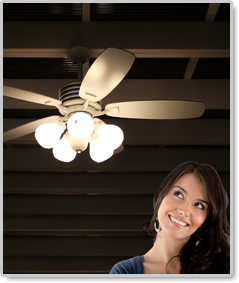 Ceiling fans can help you save energy and be an elegant feature of your home. This article discusses how to take care of your ceiling fan if you already have one, how to fix what typically goes wrong, and what to consider if you are planning on buying one.

This article has four sections:


You are probably familiar with the term "wind chill" in the wintertime. It refers to the fact that when the wind is blowing across your skin, that the increased evaporation of moisture from your skin makes you feel colder than the actual temperature of the air. Well, this same wind chill effect works in the summertime. When a ceiling fan circulates air in the room, this enables moisture in your skin to evaporate quicker, and as a result, you feel cooler . . . even though the temperature of the air in the room has not changed.

And if you a fortunate enough to have air conditioning in your home, it is because of the wind chill effect that a ceiling fan can reduce your electric bill in the spring and summer. When your ceiling fan helps you to feel several degrees cooler, then this is several degrees that you can raise the thermostat on your air conditioner. And since an energy efficient ceiling fan only uses about 100 watts of energy, compared to central AC at 3,500 watts or a room AC unit at 900 watts . . . then for every minute that your ceiling fan is running instead of your air conditioner, you are enjoying significant energy savings.

In addition to saving energy, some people find that having a ceiling fan running adds to both the decor and charm of their home.


Your ceiling fan will perform much better if at least once a year you do some simple routine maintenance tasks, which involve:

Have you noticed that most ceiling fans have a switch on the side of them (or on the remote control unit, if you have one)? The purpose of this switch is to allow you to change the direction that your ceiling fan blades turn.

For the spring and summer, you will want to be sure that the switch is in the direction that has your ceiling fan turning so that the blades are blowing the air directly down. The reason is that the air blowing directly down on you helps to create the “wind chill” effect that we mentioned above. This makes you feel cooler, even though it is actually circulating warmer air which has risen up to your ceiling (helpful accessory: wind chill meter).

But prior to the winter, you will want to remember to change the switch to the other direction, so that your ceiling fan blades blow the air up towards the ceiling. The reason you want this in the winter is that you want to circulate the warm air down from the ceiling, but you do NOT want to create a wind chill effect. So the way to do this is to change the direction of your ceiling fan blades so that they blow air upwards, and then the air flow of the warmer air is gently down the sides of your walls (not directly on you).

Just remember: you will want to be sure that your ceiling fan blades are not turning when you change the direction switch.

The spinning and vibration of your ceiling fan create a situation where things will begin to shake loose over time. And as a result, your ceiling fan can start to wobble, and then the next thing you know your ceiling fan starts to wear out faster than it otherwise would. In the worst case, it could even fall down. So even though it means dragging out a ladder (see types, costs, and reviews of step ladders), at least once a year you should climb up and inspect your ceiling fan’s screws, down rod, decorative plate, and light fixture (if it has one).

When you inspect your ceiling fan, you will probably notice how dusty and dirty the edges and top surfaces of the blades will be. A layer of dust can reduce airflow and make your fan work less efficiently, and if it is uneven, then it can contribute to your fan wobbling. When cleaning the blades, be sure not to use any cleaning material that will either mar the finish or saturate the blade surface. Depending on the blade surface, you might consider adding a light coat of polish such as furniture polish. This will not only make the blades look nicer, it will also slightly improve the efficiency because it cuts down on wind resistance (see types, costs, and reviews of: dusters; furniture polishes).

Regarding lubricating your ceiling fan’s motor, it depends on which brand / model of ceiling fan that you have. Some ceiling fans have maintenance-free double sealed ball bearings that never require oiling. Other ceiling fans have a small "oil hole" above the motor. To find this oil hole, you should ensure that the fan is turned off, stand on something very sturdy, and then check for the oil hole on the top portion of the motor. If it has such an oil hole, then add 4-6 drops of light machine oil (e.g., “3-in-One” oil) to lubricate the motor. However, you should first check with the manufacturer’s guide for your particular model of ceiling fan, as you don’t want to be pouring oil in the wrong place, since this could result in oil dripping onto the fan blades and then being slung around the room.


There are two main problems that can tend to come up with ceiling fans: 1) wobbling, and 2) noise.

Probably the most common problem with a ceiling fan is that over time it begins to “wobble,” that is, it shakes a little side to side as it is spinning. This is usually caused by the weight of the blades not being exactly matched, and then over time, the effect of this imbalance begins to cause the ceiling fan to wobble. The faster your fan then spins, the more it wobbles.

The good news is that fixing a wobbling ceiling fan is a fairly easy do-it-yourself task, using what is called a ceiling fan balancing kit. And here is a video that shows how to use a balancing kit

As you will see, it is basically a trial and error process of applying small test weights on the blades until the wobbling stops.

And here is where you can buy a balancing kit online from Amazon.com: Ceiling Fan Balancing Kit. The other cause of a wobbling ceiling fan is warped blades. If you are unable to stop the wobbling with a balancing kit, then the next step is to remove the blades and inspect them for warpage. If they are indeed warped, then you will need to replace them.

There can be several potential causes of a noisy ceiling fan. Sometimes it can be because some part of it has come loose (light fixture, decorative ceiling cover, body screws, blade screws, etc.) And this can be remedied by tightening up the affected pieces. Sometimes noise can be caused by a faulty dimmer switch.

If you only use your fan occasionally, then the noise can be caused by the fan’s bearings needing to be lubricated. If you have already lubricated the bearings, or if your model has self-lubricating bearings, then you can try running your fan for about 24 hours straight to see if this will automatically lubricate the bearings.


The most important thing to keep in mind when considering buying a ceiling fan, is that you get what you pay for. A less expensive model may look nice, but you run the risk of having problems later on with wobbling, noise, short-life, etc (see types, costs and reviews of ceiling fans).

With this said, here are some factors that you should consider when looking to buy a ceiling fan:

Downrods should be purchased for your ceiling fan to provide at least seven feet clearance above the floor (see types, costs, and reviews of fan downrods). And sizing the downrod to give a blade height of eight to nine feet above the floor will provide the most efficient cooling effect.

Poor motor design can create a number of the problems that are associated with ceiling fans. If the fan has an annoying click, buzz, or hum during operation, the motor is the most likely culprit. An under-sized motor will burn itself out, whereas a motor that is over-sized will be inefficient and waste energy.

Look for a blade pitch of at least 14 degrees, which is optimal for air movement efficiency. Avoid blades from cheap materials that can absorb moisture over time, and begin to warp or become imbalanced.

If you choose a model with a built-in light, then you might want to consider one that uses compact fluorescent lamps (CFLs), which use less energy and are long-lasting, so you won't have to make frequent bulb changes (see types, costs and reviews of CFL).

Controls can allow you to have different speeds and change directions. And you can get the standard pull-chain type, or the more convenient remote control versions.

14 Ways to Keep Cool AND Save Energy This Summer

Want to keep cool this summer and save money on your air conditioning bills? Here are 14 helpful tips. Some of these tips don't even cost any money!

With summer coming, now is a good time to starting thinking about how you can begin to adapt your lifestyle to help reduce your energy bills for this spring and the coming summer.

Using Window Treatments to Save Energy

Window treatments enhance the decor of your home, but they can also play an important role in reducing your energy bill. This article describes how blinds, drapes, and shades can each save you money.

Did you know that it can cost you more for the electricity to keep your DVR box in standby mode, than it does for your subscription fee? This article and video discusses a device that helps cut standby costs.

Checklist of What to Discuss
with Your Furnace Service Professional

When your service technician comes out to do the annual servicing of your furnace and water heater, here is a handy checklist of what you should discuss with them:

Are you sure you want to logout?

SORRY!
AN ERROR HAS OCCURRED